5 Mistakes That Will Destroy Your Digital PR Efforts

5 Mistakes That Will Destroy Your Digital PR Efforts 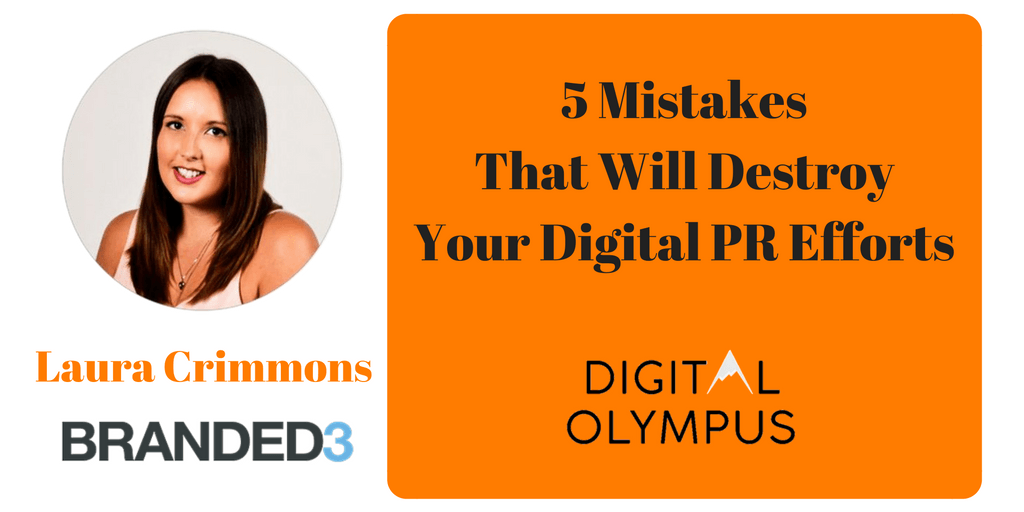 Digital PR can be a hard game; you think you’ve got a killer campaign idea, you’ve done your research into who the audience is and where they hang out online and you’re pretty certain it’s going to hit the spot — then you start pitching it to journalists and get zero pick up. Nada. And you end up resorting to drastic measures to get pick up…

Sometimes there’s just nothing you can do about it. PR can often be unpredictable as campaigns that you would never expect to do well absolutely fly, and the coverage and links roll in. At other times you can have an amazing idea and get nothing (or next to nothing), and it can seem that there’s little reason behind it. In my experience however, and from feedback from journalists, its normally the campaigns that miss one (or more) of the five features that struggle to get the pickup:

Timing is everything when it comes to selling in a campaign, you need to be able to convince a journalist why it is that they should cover your story now, and not just put it to the bottom of the pile. Key ways to peak their interest include:

The important thing here is to make it obvious to a journalist why your story is timely — tell them it relates to a story being talked about on social, something that they’ve written about recently, that it has been launched to coincide with a national day/week or tell them it’s an important launch that you’re pushing out today.

When planning your campaign timing should also be something you consider in terms of potential risks; it’s essential to check what other stories could be happening at the same time as your planned launch.

For example, if you’re planning on launching at the same time as a big political event such as the US Election, or Brexit in the UK, then the chances are you won’t see the coverage you were hoping for because every journalist is looking for angles surrounding that event.

Make sure that you understand the other big stories happening at the same time as yours, and be sure that these events won’t prevent you from achieving that all important coverage.

Imagery has always been a huge component of any PR campaign — a picture tells a thousand words as they say — and in an online world it’s event more crucial, what’s the last news story you saw online without an image? There probably isn’t one right? And how many news stories do you see every day with a video?

Personally, I would not be confident selling any campaign into press that didn’t have at least some form of visual content as part of it.

Sometimes the visuals are easy with a campaign, if you have product imagery or you’re covering an event then the answer is obvious, but in other circumstances it can be a lot harder.

It is important to remember however that imagery doesn’t just have to be photos or videos, as designs or animations can help to tell the story too.

This is why good designers, developers, animators, videographers (the list goes on), have become as crucial to campaign creation nowadays as the idea generators. Surround yourself with a good team that can help to bring your campaign to life visually and you’ll have much better chance of success.

Ok so I know this isn’t a real word and there probably is a better word for this but in essence what I’m meaning here is, how easy is it for someone else to copy your campaign or to tell your story?

When you’re thinking about the campaign think about what makes it yours; is it your unique product, data, an asset on your website?

There has to be something that means that the journalist can only write the story by mentioning and linking to you.

This could be that you have a quantity of data for users to explore on your website meaning that a journalist couldn’t possibly include it all. It could be a game or a quiz for users to play, or it could be something you have available for the user to download.

We’ll often see campaigns get coverage but not links, simply because they haven’t thought about this part. It’s as simple as sending a journalist a press release, that they can easily take and replicate without you, purely because you’ve given them all the content that they need already.

This is often the ‘So what?' question that needs to be answered, you have some great data about something or a great product or service that you’re launching but, so what? What does that really mean for people? How does it affect them? How does it improve their life? What is the problem you’re providing a solution to?

An easy way to ensure you have this element in your story is by simply adding case studies or real people to the narrative. If people can see people like them talking about the story then they instantly feel more connected and passionate about it.

Another way to encourage affinity to a story is by making it relatable to a set group of people so that even though you not talking about one person, you’re still talking about a specific group.

Buzzfeed do this extremely well with their content such as:

I’m from Yorkshire therefore I can instantly relate to this content, and will probably have an opinion as to whether I agree with it.

Again with this example, as I was growing up during the ‘00s I’m going to relate to this content, and as such will be more likely to share this with my friends.

We can replicate this in our own campaigns by including relevant demographics data such as location, age, or specific interests that make people identify and relate to it.

Finally, the emotional element to the campaign. If our campaigns truly tap into emotions, then it is infinitely more shareable and more likely to get coverage and links. It doesn’t really matter which emotion either, we could be making people happy, sad, shocked, as long as we’re making them feel something then we’re winning.

The shock factor is especially important when it comes to data; if you’re trying to sell in a story with data and the data is kind of what you’d expect then you’re never going to win. You need to make sure that at least some elements of the data are going to shock or surprise people.

So to finish up, here’s my 11 questions that I think you should ask yourself before any PR campaign to make sure you’re giving yourself the best chance of securing those links and coverage:

Laura Crimmons is Branded3's Communications Director, having started the PR team at the agency in 2012 she now oversees the PR and social media strategy across all clients. With extensive SEO and social media knowledge, and experience in both traditional and digital PR, Laura knows how to create and execute campaigns which deliver multiple online benefits.

Laura is Branded3’s Communications Director, having started the PR team at the agency in 2012 she now oversees the PR and social media strategy across all clients. With extensive SEO and social media knowledge, and experience in both traditional and digital PR, Laura knows how to create and execute campaigns which deliver multiple online benefits.